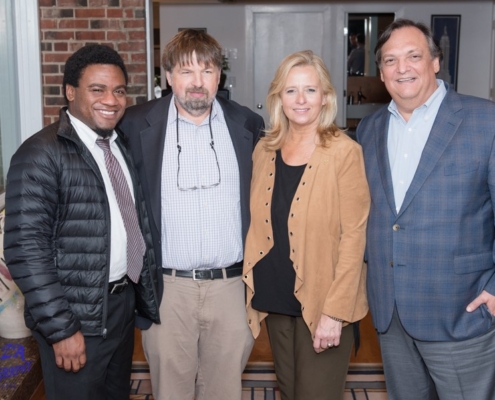 Paul Friedman is the founder and Executive Director of Safer Country, a gun violence prevention non-profit focused on keeping guns out of unsafe hands. He is inspired by the memory of his great aunt, Elizabeth Shulkin, who was shot and killed in her hotel room on December 1, 1981 while on vacation in Florida.

Prior to Safer Country, Paul served as Executive Director of the Virginia Tech Victims (VTV) Family Outreach Foundation, during which time he worked with the City of Alexandria and Virginia Tech’s local graduate schools to create a tree grove in Chinquapin Park to honor the victims and survivors of the April 16, 2007 massacre.

Paul graduated with a B.A. in Politics from Brandeis University and a J.D. from New York Law School.  In 1987, Paul moved to Washington, DC, worked on Capitol Hill.  In 1988, he was a Field Organizer in Iowa for Paul Simon for President (where he had the privilege of informing Sen. Simon that he had received the Des Moines Register endorsement for the Democratic nomination) and an Advance Man for the Dukakis/Bentsen campaign.

In 1990, upon returning to Washington, DC, he was elected Chair of the Ward 6 Democrats and became the PAC Director for Environmental Action, where he wrote that year’s Dirty Dozen.  On August 25, 1991, Paul married his brilliant and lovely wife, Lori, a CPA, and moved to Alexandria, Virginia.

In 1992, Paul successfully managed a state representative campaign in Orlando, Florida and, later, a City Council race in Alexandria.  Paul went on to work as a liaison to the Legal and Financial Community in the DMV for the Development Corporation for Israel and the Director of Development for Save A Child’s Heart, Neediest Kids and Every Child Matters.  While with Every Child Matters, he led the Voe Kids Action Fund, a federal PAC that supported candidates in close races that supported expanded funding for the needs of children.

Alexandria Activities
Paul has served for over 20 years as a member of the Alexandria Democratic Committee and a large portion of that time as a Precinct Captain.  He served six years on Alexandria’s Budget and Fiscal Affairs Advisory Committee and six years on the board of Agenda: Alexandria, a nonpartisan group that holds forums about local issues.  Paul also served as Mark Levine’s political consultant in his first victorious Democratic primary campaign for Delegate in Virginia’s 45th District.

More recently, in 2020, Paul was elected to serve as the Alternate Delegate from Virginia’s 8th Congressional District for Joe Biden for President to the Democratic National Convention, which would have been held in Milwaukee, Wisconsin but for the covid crisis.

Boyd is a real estate investor who manages his own properties.  A political and community activist, Boyd was a Delegate to the 2016 Democratic National Convention and is a former member of the Alexandria Democratic Committee Executive Board.

As head of Mandala Research, one the world’s leading travel and tourism research firms, Laura evaluates emerging developments in the industry and her firm has pioneered policy changes in the industry, including minority inclusion.

Named one of the 14 Most Influential Women in Group Travel, Laura’s firm has pioneered the “firsts” of many niche studies in the industry.

As well, she has served as an appointee to the State Council on Women by Governor’s Warner and Kaine and as a Board member to the U.S. Department of Commerce Travel and Tourism Advisory Board under Secretary Penny Pritzker.

Additionally, Laura is founder of Women in Travel and Tourism International, an organization committed to the promotion, support, and advocacy for women’s leadership in the travel industry.  Laura is also a former candidate for State Delegate in Virginia’s 45th District and has served two Virginia Governor’s on the State Council on Women.

A graduate of Bryan College and Washington & Lee University School of Law, Vincent is a reentry attorney in Northern Virginia.  He works with individuals who have criminal convictions and/or charges, helping them overcome the collateral consequences that they face due to their record such as employment challenges, court fines, driver’s license suspensions, etc…

Vincent has a deep appreciation for how the justice system works and the need to ensure that the rights of all individuals are protected.  In that light, he wants to ensure that the reporting of convictions of violent crime and domestic violence prohibits individuals from owning, purchasing and possessing firearms while not increasing unnecessary barriers to non-violent individuals seeking to return to and play a positive role in the community.

Lori is a Certified Public Accountant with extensive experience in public and private accounting. Since 2009, she has operated her own firm in Alexandria, Virginia.

When Lori isn’t grappling with accounting principles or the Internal Revenue Code, she enjoys life with her husband, Paul, the Executive Director of Safer Country, and the couple’s dog, Sadie.

Clerk of the Circuit Court, City of Alexandria